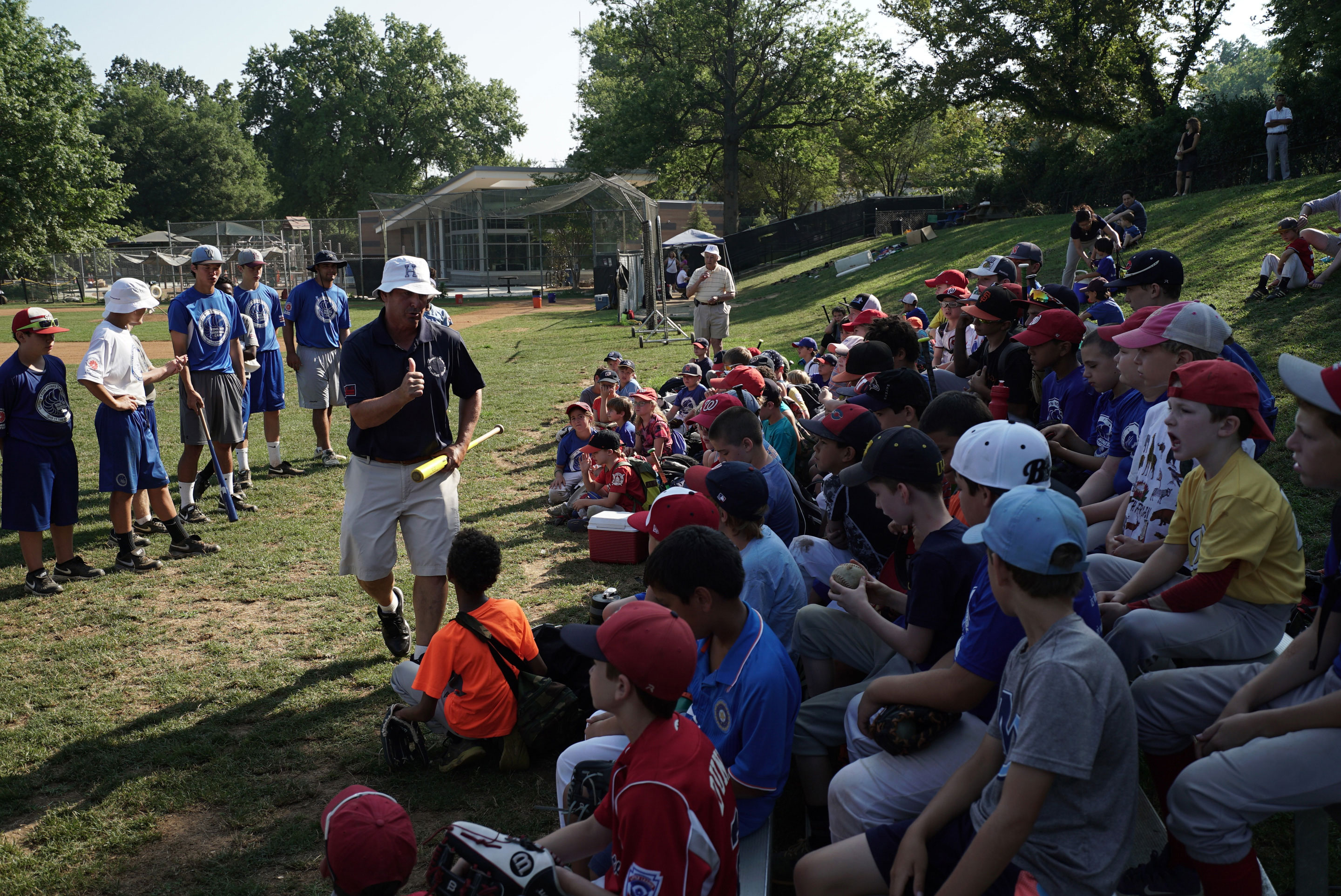 John, aka Coach Mac, is a native Washingtonian and product of the DC Public Schools and the #8 Police Boys and Girls Club. He has served as director of Home Run Baseball Camp since founding the program in 1994. Thousands and thousands of ballplayers ages 4-12 from all over Washington and New York City have participated and no full scholarship request has ever been turned down. John places a premium on effort, competive fire, inclusion and good sportsmanship. Hundreds of camp alums have played college baseball. Over 2,000 assistant coaches have worked on John’s staff- the majority were camp alumni.

A motivators motivator, John is a sought after speaker to companies, organizations and schools. He has been invited to speak all over the country and overseas in such places as Augsburg, Havana, The Hague, Tokyo, Paris and San Pedro de Macoris.
After graduating from Wilson HS, John played college baseball for The University of South Alabama, Enterprise (AL) Community College and Troy (AL) University. John’s teams competed against Mississippi State, UCLA, LSU, South Carolina, Cal State Fullerton, Michigan State, Ole Miss, Florida State, Auburn, Alabama, Texas A&M, Southern Mississippi, Iowa, BYU and South Florida, among others.  Three years his teams were ranked in the top 15 nationally and twice reached the NCAA tournament. John played for Alabama Baseball Hall of Fame coaching inductees Ronnie Powell, Tim Hulsey and American Baseball Coaches Association Hall of Famer Steve Kittrell. Five of his teammates went on to play in the Major Leagues. John earned a Bachelor of Science degree in Journalism.
In 1994 John also founded Elementary Baseball, a critically acclaimed literacy, baseball and mentoring program for 120 a year kids in Washington’s Shaw neighborhood. The program soon partnered with the DC Superior Court and the DC Court of Appeals. Chief Judge Eugene N. Hamilton and Chief Judge Annice M. Wagner become directly involved in Elementary Baseball’s development and served as key allies and advisors. Judges A. Franklin  Burgess, Russell F. Canan, Gregory E. Mize and Michael L. Rankin worked closely with John in designing the mentoring aspect which was called the “In Season Counselor” program. More than 80 judges and court employees stepped up to be paired one on one with Elementary Baseball students.
Sen. Birch Bayh also got behind the program in its first year and played a critical role in the programs growth and community implementation. In 1997, the US Department of Justice funded Elementary Baseball and named it one of five ‘Pathways to Success’ programs nationally for kids in low income neighborhoods. Elementary Baseball was a model for the University of Notre Dames’ Service Program –  Teamwork for Tomorrow. Over 800 students participated over the programs’ 15 year run.
In 1999, John was asked by Sister Lenore Gibb and the Grey Sisters of the Immaculate Conception in the Dominican Republic to work with retired MLB player Jesus ‘Pepe’ Frias to design and implement Beisbol y Libros- a school based reading and baseball program in the 10,000 student Consuelo public school system. It became the only program of its kind on the island. Many Washington and Dominican coaches stepped up to get involved building and sustaining the program. More than 15 Beisbol y Libros student athletes went on to sign contracts with Major League organizations.
For twenty years John also taught a course called Alternatives to Violence on the adjunct faculty at his alma mater Wilson HS. In 1998 he was awarded the Ray A. Kroc Teacher Achievement Award for the Washington area.
John has written for National Catholic Reporter and contributed to the book What Do You Stand For? He speaks regularly around the country and visits include Brown, Georgetown, Yale, American, Howard, GWU, the Fulbright Scholars dinner, the All for One gang prevention program in California, the US Customs and Border Patrol Advanced Training Center and the American Psychiatric Association Annual Convention and the Alabama Baseball Coaches Convention, among others.
John has been profiled in Newsweek, Time, The Wall Street Journal, Sports Illustrated, The Washington Post, The Washington Times, Augsburg Allgemeine, Education Week, Legal Times and on the Today Show, NPR, CNN, Univision, Al Jazeera America, Voice of America and Nightline. In 1998 he was named by MTV as one of the top ten community leaders under 30. In 2000, Chief Judge Eugene N. Hamilton awarded him the DC Superior Court Medal of Excellence and in 2001 John was named an Irish American of the Year. John lives in Washington with his wife and two daughters.